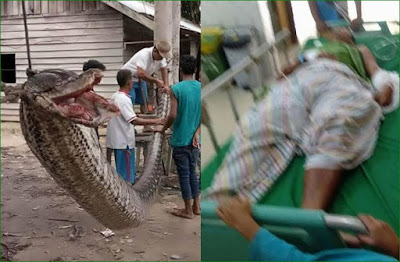 A 23ft. MONSTER python has savaged an man in a brutal fight to the death.

Brave Robert Nababan says he came across the huge reptile on a road in the Indragiri Hulu Regency of Riau Province in north-western Indonesia. The 37-year-old was riding his moped home from his job in Indonesia when he saw two pedestrians blocked from crossing the road by the giant snake.

From his hospital bed, he revealed how he had tried to get hold of the snake to move it. He was quoted as saying: "I tried to catch it. It bit my arm, and we wrestled for a while." 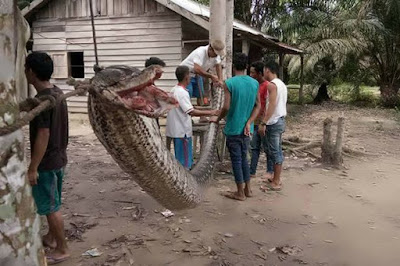 But miraculously Mr. Nababan managed to win the combat and killed the snake. He suffered deep lacerations to his left arm and hand.

Despite his bravery, some netizens called his actions a dangerous act that we shouldn’t do.